Bajo Fuego (Under Siege) is a moving documentary about the struggles of rural peoples in the north of Cauca, Colombia. That region is the area with the highest levels of political violence in the entire country. From the studios at Mississippi Dragonfly, the award-winning video takes a detailed look at the 2016 peace accord and the failures of the Colombian government to meet its obligations regarding programs of substitution for illicit crops, rural development, and land rights. It covers the Colombian government’s most concerning failure of all, to ensure that rural, indigenous, and Afro-Colombian communities and social movement leaders are able to live in peace, free from paramilitary violence and extrajudicial killings. It vividly portrays the people’s persistent efforts to demand that the state meet its obligations for peace and economic opportunity in an area where the only viable cash crop has been coca production.

Click HERE for tickets to see BAJO FUEGO (UNDER SIEGE), a powerful and high quality feature-length documentary about peace, the drug war, and land rights in rural Colombia

This documentary is of particular interest to supporters of the Alliance for Global Justice because it portrays a community that we visited in our first delegation to Colombia in 2009, and that we continue to visit to this day. The municipality of Miranda is home to a collective farm that is one of the affiliates for the FENSUAGRO federation of agricultural workers unions. The community there has been dealt a hard blow by political violence, having lost people to paramilitary murders, and living each day under the ever-present shadow of threats.

This showing of Bajo Fuego is a fundraiser for David Escobar, who was part of the production crew. David is an independent journalist who has worked closely with AFGJ, helping us get supplies to street medics in Cali during the national strike. He has been an invaluable source of on-the-ground information during the strike. David was robbed at gunpoint of his camera and other equipment while filming a confrontation with protesters by the police. Please help us replace these vital tools of struggle. 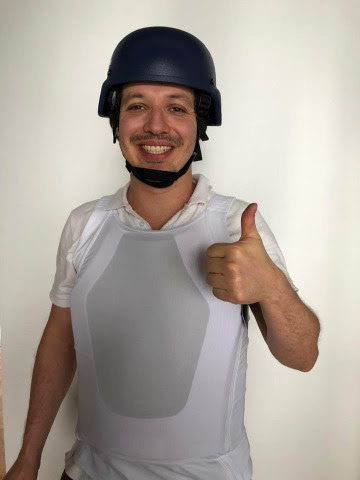 David Escobar modeling some of the protective equipment he has used while covering the National Strike in Cali, Colombia. On at least one occasion this protected him when a tear gas canister was fired at him point blank.

A Year in Review: Racism, Repression, and Fightback in the USA

Sunday, January 30 Webinar: “Nicaragua: What We Saw, What’s Next?”

Join the Colombia Electoral Accompaniment and Observation Mission, May 22-June 1