Border wall construction would cut right through the only part of the country where Jaguars can be found, the San Pedro River watershed.

When the Arizona-Idaho Conservation Act was being voted on in 1988, a rider was added at the last minute by Sen. John McCain. For the first time in history, a federal law was passed that exempted a project from all cultural and environmental laws. What was the project? It was the US Air Force funded Mount Graham Astronomical Complex. Mount Graham is home to a sky island environment hosting some 18 endemic species of plants and animals, and a place sacred to the San Carlos Apache, where songs and healing herbs are to be found, and where ancestors are buried.

What does this have to do with the border and proposed immigration reform? It set the precedent for a situation where, to date, some 37 federal environmental and cultural protection laws have been waived with regard to border militarization and wall construction–the largest such waiver in US history.

The Gang of Eight proposal, together with the “Border Surge” amendment of Senators Bob Corker and John Hoeven, would allocate up to $50 billion for “border security”, over the original $6.5 billion; it would double the number of border patrol agents; it would result in 350 to 700 miles of new border wall construction; and it would deploy a wide array of drones and thermal imaging cameras. It extends Border Patrol authority and access any place within 100 miles of the border and further enshrines access to all federal lands. The legislation includes provisions hat would allow for road construction, border barriers and, ominously, “Forward Operating Bases”.

The border is home to some of the most important ecosystems in the country. San Diego County has more biodiversity than any other county in the US, and is one of the world’s 10 most bio-diverse places. Big Bend National Park in Texas is one of the most varied ecosystems we have and, along with the San Pedro River watershed, here in Arizona, one of two areas in the US where one can see coatimundis. And speaking of the San Pedro, one of the world’s most threatened rivers, its watershed is the only place in the US where the range of Mexican Jaguars extends, as well as being one of North America’s most important bird migration routes, visited each year by some 4 million birds, representing half of US bird species.

Border wall construction creates an artificial barrier that disrupts animal migration and the natural flow of water ways at the cost of some $4.5 million per mile. Border militarization results in a massive rise of motor traffic, including heavy machinery and off-road Border Patrol traffic.

walls and this militarization. Take, for example, Los Laurales and Matador canyons in San Diego County. This canyon area was filled by ripping 2 million cubic yards of earth from nearby mountain tops. There was no ecological regulation or oversight, and little to nothing done to deal with resulting erosion. The Tijuana river is only 600 feet away, and sediment build-up threatens to raise its surface level and disrupt the twice daily inundation of ocean salt water necessary to its ecology.

I started off talking about Mount Graham , its ecology and significance to the San Carlos Apache. For the most part, we can say that anti-immigrant hysteria manifested in the form of border militarization and wall construction damages border ecosystems, but not so much immigration itself. But there is one way in which immigration into this area has been devastating. Starting in the mid-1800s, there was a huge migration of English speaking persons here, and that migration has not ceased. This brought about dramatic changes. Take what happened to the Santa Cruz river. One hundred years ago, the river was deep enough for a steamboat to make regular trips between Nogales and Tucson. Fifty years ago, that was no longer possible, but you could still fish the waters year round.  Today the river is dry, except during heavy rains.

With the invasion of the English-speakers came mega-ranching and agribusinesses, the military-industrial complex, and a runaway population explosion. This was all preceded by US wars for land against the Apache and, then, against Mexico, and the construction of forts and factories to wage war against the world. What happened to our rivers, what happened to Mount Graham and what is happening to our borderlands continues a legacy of conquest and occupation.

It’s time we put a stop to it. 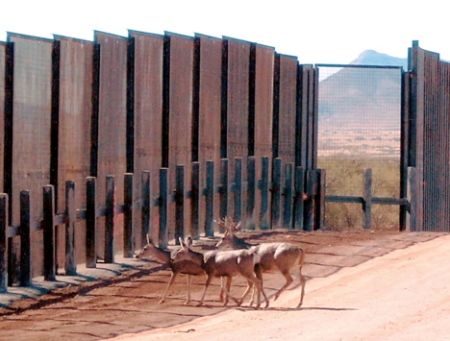